Songs of the Month...

So, at the end of every month, I'm going to make a countdown list of songs that I've been loving. This is my countdown for May: 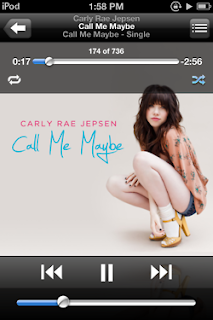 9. Laserlight- Jesssie J (feat. Davis Guetta). When I first heard this song, I wasn't overly impressed. It just sounded like the same old mainstream songs that everyone sings. However, after hearing it a little more often, I have to say that it's grown on me. The lyrics are simple and easy to follow, and although it definitely isn't the best work of either Jessie J or David Guetta, the song does have a certain Je ne sais quoi to it.

8. Every Little Thing- Ryan Beatty. He's a sixteen year old boy, who posts videos of himself singing on youtube. He is incredibly talented and his voice is brilliant. This song is his first original, and it is really good. The lyrics are pretty and the simple tune has you pressing the repeat button again and again.

7. Boyfriend- Justin Bieber. It's nice to see Justin experimenting with other styles, and I have to say that it works for him. I'm not a Bieber fan at all, however "Boyfriend" is really quite a good song. It gets stuck in your head and you can't help but find yourself singing along when it comes on, on the radio.

6. Picking up the Pieces- Paloma Faith. I love Paloma Faith and this song is just as amazing as I'd expect it to be. Nothing else really needs to be said...

5. Euphoria- Loreen. Well I couldn't do my favourite songs of May, without including the 2012 Eurovision single. I actually think that this song did deserve to win. It's a good dance tune and it easily gets stuck in your head. Also, Loreen's voice has a certain dream-like quality to it, which is quite entrancing.

3. Payphone- Maroon 5. Adam Levine's voice is like melted chocolate, and so's this track!

2. Both of Us- B.o.B (feat. Taylor Swift). I really liked this song, even from the first time I heard it. B.o.B and Taylor Swift is a collaboration that shouldn't work and yet actually works really well. The mix of country and rap is different to most songs, but they compliment each other really well.

1. We are Young- Fun. This song is just such a feel-good track. It makes me want to be the rebellious teen society portrays me as and it is just ssh a fun track. The lyrics are great, the tune is catchy and the video, although weird, totally works for the song. I love this track, and I'm not going to stop having it in my head for a while yet.

So that wraps up my favourite songs of May countdown. What are yours?

AprilRose97
I think I realised that I really loved fashion when I was 9 years old. Suddenly I was interested in going shopping with my mum, and suddenly being dressed in that horrible bag like dress, which was supposedly 'cute' just didn't cut it. I think I decided to start this blog because I'm incapable of walking down a street without critiquing every detail of every outfit I see. I guess I figured that this was a place more suited to my opinions.